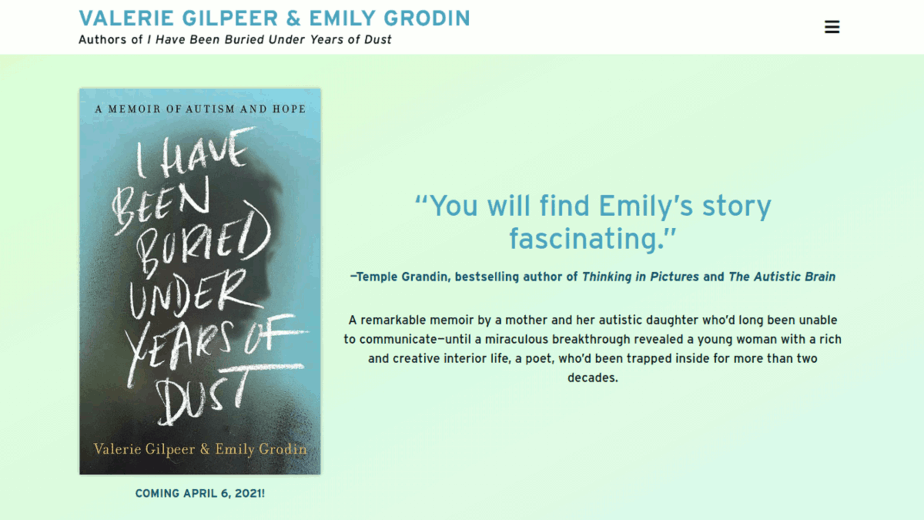 “You will find Emily’s story fascinating.”
—Temple Grandin, bestselling author of Thinking in Pictures and The Autistic Brain

A remarkable memoir by a mother and her autistic daughter who’d long been unable to communicate—until a miraculous breakthrough revealed a young woman with a rich and creative interior life, a poet, who’d been trapped inside for more than two decades.

I HAVE BEEN BURIED UNDER YEARS OF DUST

“I have been buried under years of dust and now I have so much to say.”

These were the first words twenty-five-year-old Emily Grodin ever wrote. Born with nonverbal autism, Emily’s only means of communicating for a quarter of a century had been only one-word responses or physical gestures.

That Emily was intelligent had never been in question—from an early age she’d shown clear signs that she understood what was going on though she could not express herself. Her parents, Valerie and Tom, sought every therapy possible in the hope that Emily would one day be able to reveal herself. When this miraculous breakthrough occurred, Emily was finally able to give insight into the life, frustrations, and joys of a person with autism. She could tell her parents what her younger years had been like and reveal all the emotions and intelligence residing within her; she became their guide into the autistic experience.

Told by Valerie, with insights and stories and poetry from Emily, I Have Been Buried Under Years of Dust highlights key moments of Emily’s childhood that led to her communication awakening—and how her ability rapidly accelerated after she wrote that first sentence. As Valerie tells her family’s story, she shares the knowledge she’s gained from working as a legal advocate for families affected by autism and other neurological disorders.

A story of unconditional love, faith in the face of difficulty, and the grace of perseverance and acceptance, I Have Been Buried Under Years of Dust is an evocative and affecting mother-daughter memoir of learning to see each other for who they are.

“Heartbreaking and uplifting in equal measure, I Have Been Buried Under Years of Dust is a chronicle of not only finding one’s voice, but of learning to make others understand that voice — a whisper to a scream in reverse.”
NPR

“In this debut, Valerie Gilpeer writes a compelling narrative of motherhood, and her daughter, Emily Grodin, offers insight into how she began to express herself late in life, having been born with nonverbal autism. Gilpeer writes candidly, without falling into self-pity, and her early chapters offer personal reflections as well as resources for families affected by autism. …An impactful memoir of self-discovery.”
Library Journal

“Parents of children with autism will find gentle, helpful guidance in these pages.”
Kirkus

“A person who is completely non-verbal may have an active mind concealed by sensory over-sensitivity and problems with controlling movement. You will find Emily’s story fascinating.”
Temple Grandin, bestselling author of Thinking in Pictures and The Autistic Brain

“Emily Grodin is a powerful new voice of a once voiceless generation. It is impossible to not be moved by the brilliance and beauty of her writing.”
Matt Asner, co-founder of The Ed Asner Family Center

“Empower is an overused word, but the example set by the authors, to trust their instincts and often ignore the ‘experts,’ stands as a valuable lesson for us all. Should be required reading for anyone who has a child ‘on the spectrum’ as much for the wrong decisions made as for the right ones.”
David Zucker, film director, producer, and screenwriter

“This is a story of hope, challenge, resilience, and strength. Emily defies all odds by her willingness to share her truth and express her thoughts in poetic, powerful ways. Her mother Valerie, always by her side, witnesses her daughter’s awakening—and allows Emily to shine. This book is an awakening for us all, and will do for the non-speaking community and their families what Helen Keller’s books did for the deaf community. We will finally be heard; finally be understood; finally released from bondage.”
Elaine Hall, founder of The Miracle Project and author of Now I See the Moon

“Valerie and Emily share the peaks, valleys, challenges, and successes so many families living with autism experience. The opportunity to see their journey through the eyes and words of both parents and child is a gift, eloquently presented.”
Darlene Hanson, AAC Connections

“For every parent who has a child that was not at all what they expected and discovered they could be more than they dreamed possible. You may not see that your dedication and resilience are paying off now but who knows they may pay off in dividends later. A story for every human who knows what it feels like to be alone and then one to be seen.”
Rabbi Sherre Hirsch, author of Thresholds and chief innovation officer at the American Jewish University

“Through personal narratives, letters, and reflections, Emily expressively reveals a deep level of thought, feelings, and insight previously hidden to those around her. She defies incredible odds in a world where nonspeaking individuals have limited chances to develop agency. The world needs to hear from more autistic advocates like Emily who challenge our misguided assumptions about autism.”
Edlyn Peña, Ph.D., director of Autism and Communication Center at California Lutheran University

Valerie Gilpeer is an attorney who has been practicing law for forty years. She shifted her civil law practice twenty years ago in favor of representing families of disabled children trying to obtain educational services from local school districts. She has continued to focus on disability rights law through her volunteer work with several nonprofit organizations in the Los Angeles area. Valerie and Emily live with Tom Grodin, her husband and Emily’s dad, in Encino, California.

Emily Grodin is a college student studying journalism, psychology, and creative writing and has been recognized for her academic achievement. She has been featured in Leaders Around Me and published in Amuse-Bouche. Emily is an advocate for herself and members of her community in an effort to dispel the misconceptions and nonacceptance of those with autism.

Poetry: “Soul in the Mortal Flesh” Solstice Magazine Winter 2021
A mortal never challenges the gods. Weak and raw in the flesh.
At least not intentionally with jealous or spite. Read on…

Poetry: “A Bud is Born” Solstice Magazine Winter 2021
From the dirt we are born, from the ground we breathe life. Waiting
just below the surface until the time is right. Read on…

Book resources on their way. 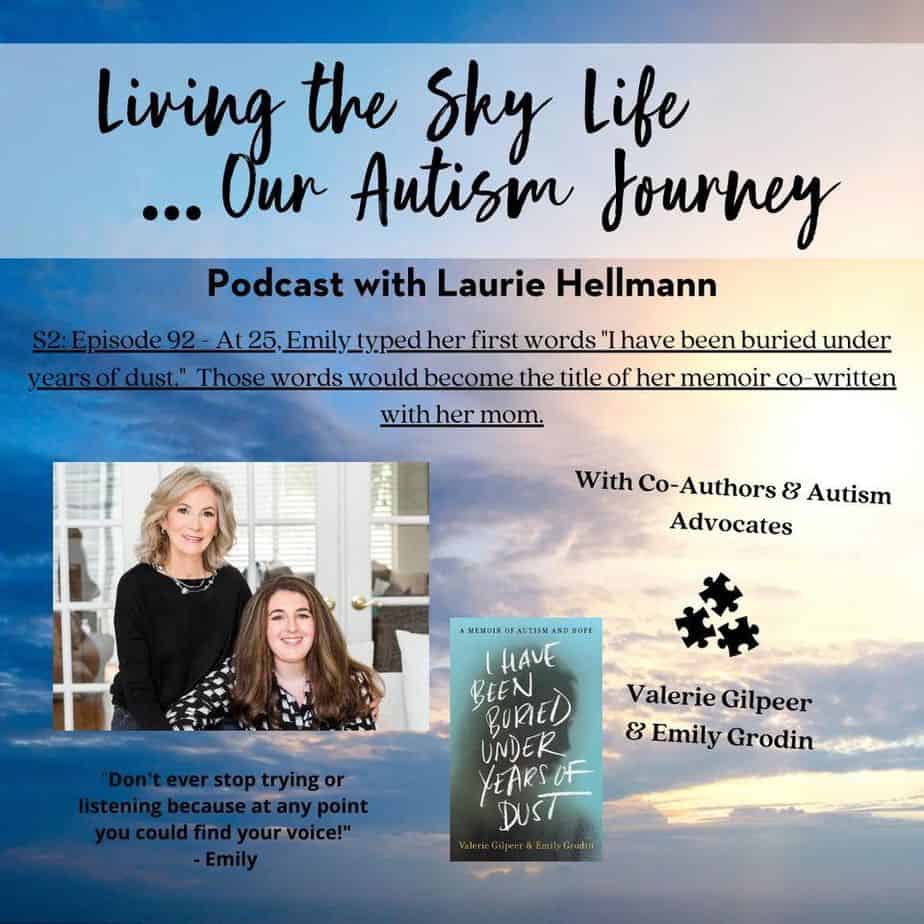 To send a message to Valerie or Emily, please fill out the form below. Thank you!

You can purchase signed copies at: